As a former detective with the Vancouver Police Department, a former Lieutenant Colonel with the British Columbia Regiment and a long-time advocate for youth education and mentorship programs, Harjit has made serving others a cornerstone of his life.

Harjit, who immigrated to Canada from India with his family when he was five years old, grew up in South Vancouver and has benefitted from everything our diverse and culturally rich community has to offer.

For 11 years, Harjit was a member of the Vancouver Police Department, based primarily in South Vancouver. He completed his career as a detective with the gang crime unit. As a member of the British Columbia Regiment (Duke of Connaught’s Own), he participated in four operational deployments—one to Bosnia and three to Afghanistan.

On October 19, 2015, Harjit was elected as Member of Parliament for Vancouver South. He is honoured to serve as a strong voice – and advocate – for the community in the House of Commons, and to bring valuable and informed perspectives to the table. In addition to his role as MP, he proudly serves in the Prime Minister’s Cabinet as Minister of National Defence. 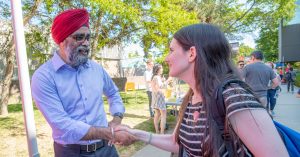 This election is going to be close. Supporters like you will make the difference to re-elect Harjit Sajjan in Vancouver South.

Please sign up for updates, including ways you can help out.